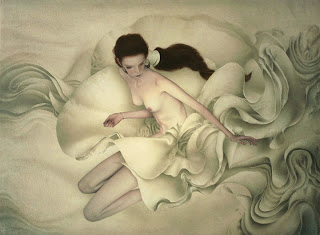 I just found out that.....Kanye, let go of my award!!! Huge Thanks to everyone at Spectrum for all the hard work they do every year. This is such an honor. 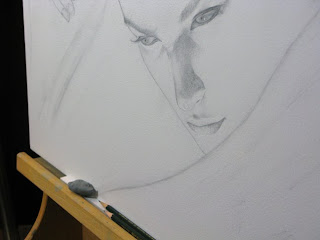 Posted by EricFortune at 5:55 PM 7 comments: 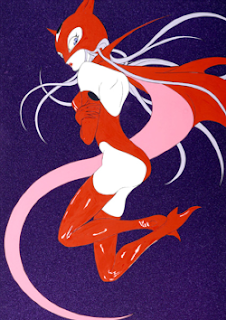 This is just awesome. I'm heading out to LA in. I really hope I'm in time to see this show!
see show here


In case you don't know. Here's the press release

Legendary artist Yoshitaka Amano will make a rare U.S. appearance with his newest exhibit, DEVA LOKA, created especially for a U.S exhibition and named for the ancient Indian land of God. As an ode to his childhood love for American comics, culture and automobiles, Amano¹s latest breathtaking and vibrant pieces are boldly coated with auto paint and metallic glitter.

Amano is widely acclaimed for his work in animation and video games. He is renowned for designing the characters for the hit video game, Final Fantasy, as well as for anime films including Vampire Hunter D, Guin Saga, Final Fantasy, and Front Mission.

"Between the late 60's and the 70's, and during my early years in the art world, I was greatly influenced by American comic books and pop culture. I'd like to show my gratitude for the inspiration America gave me with this exhibit. With the theme of DEVA LOKA, all of my concepts and influences are able to come together, centered in one place. I hope everyone enjoys my show."

Deva Loka will be Amano's first major exhibition in Los Angeles in nearly a decade. 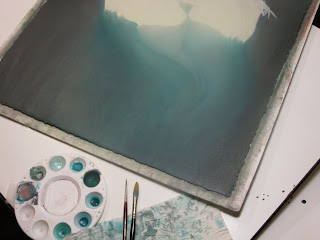 This particular piece has been more confusing to me than most of my previous work. I usually like to leave some room for spontaneity. However, I completely covered the background here about 3 times and totally lost the background drawing in the mix. I was trying to be more aggressive and ended up making some major corrections. Ultimately I stopped painting and had to reestablish what I wanted this piece to look like since it had completely changed. Having figured out my new direction I'm happier than I think I would've been originally. Though the journey there wasn't fun. Always learning :/
Posted by EricFortune at 7:25 PM 3 comments: 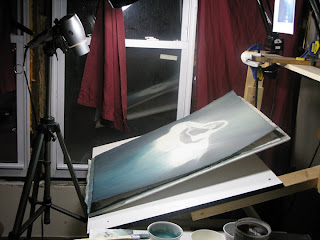 I recently mounted my hair dryer on my tripod. It looks a little crazy but it does help save me time by allowing me to dry work while mixing paints, going through reference, blogging etc. The piece shown has been progressing at a frustratingly slow pace. Just recently made some decent progress and it's starting to pick up. Building up the piece as a whole just isn't that fun. I want to get in and noodle away but without proper context things often need reworking. I think it's about ready for some noodling...or if you prefer, some detailing.

After experimenting with some varnishes (Golden's Matte & Satin acrylic varnishes) I decided to go with Satin. It looks great. It unifies the surface of the painting and sets the darks a little deeper adding some nice depth to the work. Quite a nice effect. 3 coats seems to do the job. Too many coats and it starts to get streaky so be aware. Thanks to everyone who dropped some knowledge on the previous post!
Posted by EricFortune at 3:47 PM 7 comments:

Nice:) Lines and Colors
Posted by EricFortune at 9:58 AM 3 comments:

What does it take to be a Cover Artist?

Great question. For some great answers check out Jon Schindehette's Art Order Blog. He has some of the best illustrators and Art Directors in the scene giving great advice. Not just for doing covers but for being a great artist.

"I recently received a question as part of the Ask the Art Director portion of ArtOrder, and thought it was a nice industry-wide question. Due to the nature of the question, I sprinkled my list of AD's with some cover artists that I've had the opportunity to work with.

And here's the question:

"I'm a recent graduate from the Academy of Art University in San Francisco in illustration. My dream is to do fantasy book covers. I have really focused my portfolio on that and I know I have everything it takes to be a great freelance cover artist, but now I can't seem to get my foot in the door.

I was sure all I needed was a rep, but I've had no responses from any. By the looks of it, 99% of the artists I see being represented are doing graphic and cartoony stuff which I will never be able to do. The reps are only interested in art that is viable for advertising is how it seems.

So my question is--how do I meet the right people? How do I get my art seen? Do I need to start at a publisher smaller than Wizards or Tor? If so, how do I find them? Are the conventions really a good way to get started?

Check out my site if you have time to see what I have to offer."

I left the artists name and url out of the email on purpose. While they agreed to ask their question in public, I wanted to allow them the option of reading the critiques in private.

And the answer is..." click here for the responses
Posted by EricFortune at 11:35 PM 4 comments: 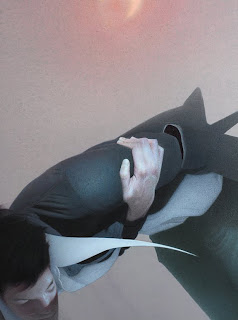 The past few days I've been focusing mostly on the hand, face, shirt area here. Still needs a little work on the jacket. Was supposed to finish Sunday...but perhaps tonight.
Posted by EricFortune at 11:25 AM 11 comments:

Just curious to how you guys are varnishing(if at all) your work? Esp work on paper. I'm thinking about trying it for some of my upcoming work. Mostly, because I don't like having a panel of glass/plexi between the viewer and the work. The museum glass/plexi is amazing and also amazingly expensive. Presenting without a panel at all could be really nice. I've tried the high gloss varnish with my technique(acrylic on watercolor paper).

Pros- deeper , richer color, and of course the protection it offers.
Cons- it really made the texture of the cold press paper stand out as well. It also made brush strokes that weren't very noticeable previous become more apparent. That may not bother me so much now. We'll have to wait and see.

I'm currently working on hot press watercolor paper so I'm assuming it'll be a little different. Perhaps not as much of an issue concerning texture. Got some old illos and will be doing half satin finish other half matte. Just to compare. It's acrylic varnish and it's pretty watered down. So kinda like my work it will be applied in multiple thin washes. Hoping for a nice even application. One tip from Dan Dos Santos' dvd, a foam brush makes for a nice even applicator. I think it's the stiffness that makes it so good...anywaay:/

Any advice, tips, thoughts will be highly appreciated.